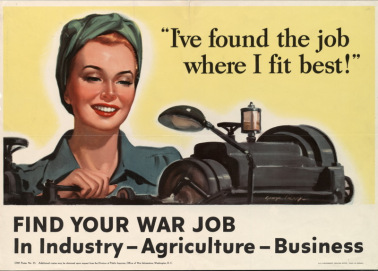 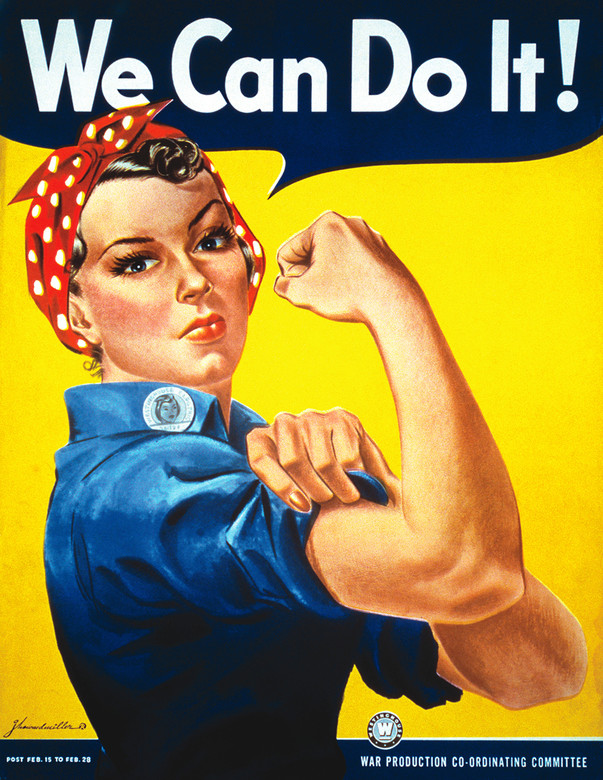 While women worked in a variety of positions previously closed to them, the aviation industry saw the greatest increase in female workers. More than 310,000 women worked in the U.S. aircraft industry in 1943, representing 65 percent of the industry’s total workforce (compared to just 1 percent in the pre-war years). The munitions industry also heavily recruited women workers, as represented by the U.S. government’s “Rosie the Riveter” propaganda campaign. Based in small part on a real-life munitions worker, but primarily a fictitious character, the strong, bandanna-clad Rosie became one of the most successful recruitment tools in American history, and the most iconic image of working women during World War II. (Continue reading from History.com)

Women may have saved the day during WWII, but when the war ended, things quickly changed. Soldiers were returning home and they needed jobs to help them get back on their feet and reacclimatize to civilian life. The managers who had previously begged women to help out were now forcing them back into their kitchens to free up jobs for men.

By 1948, the percentage of women in the U.S. workforce dipped to 32.7 percent, according to the U.S. Department of Labor, this despite a poll taken in the last few years of the war that suggested between 61 to 85 percent of women wanted to remain in their jobs when the war was over. The men may have prevailed at the time, but there was no turning back to a world before the war. In the ensuing decades, women took up ideological arms to battle for their rights, including equality of pay, opportunity, and treatment in the workplace. (Continue reading from History.com)

Prior to World War II, women were mostly homemakers. Those that worked outside the home usually worked as secretaries, receptionists or department store clerks. Once America entered World War II, however, men went off to war by the millions and women stepped into the civilian and military jobs they left behind. Women were proud to serve their country - but how did their service during the war inspire their fight for social change and equality?

As America’s war machine went into action, the government initiated a massive publicity campaign to persuade women to replace men on assembly lines in factories and defense plants. They produced posters and film reels of glamorous women in the workplace to entice women to serve their country as part of the home-front labor force. (Continue reading from History.com)

How the War Empowered Women

As America’s war machine went into action, the government initiated a massive publicity campaign to persuade women to replace men on assembly lines in factories and defense plants. They produced posters and film reels of glamorous women in the workplace to entice women to serve their country as part of the home-front labor force.

Yet the not-so-glamorous image of Rosie the Riveter depicting a confident-looking woman wearing coveralls and a red bandana and flexing her muscles under the headline, “We Can Do It!” remains one of the best-known icons of World War II.

Meant to inspire patriotism, the image of Rosie the Riveter was a new and different way of portraying women, and many historians cite her as an inspiration for female liberation. (Continue reading from History.com) 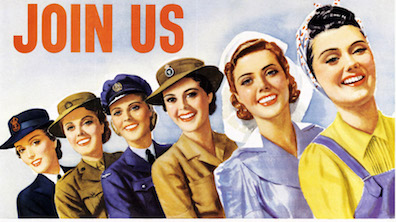