Titanium (Ti), chemical element, a silvery gray metal of Group 4 (IVb) of the periodic table. Titanium is a lightweight, high-strength, low-corrosion structural metal and is used in alloy form for parts in high-speed aircraft. A compound of titanium and oxygen was discovered (1791) by the English chemist and mineralogist William Gregor and independently rediscovered (1795) and named by the German chemist Martin Heinrich Klaproth. Continue reading from Encyclopedia Britannica

The first titanium mineral, a black sand called menachanite, was discovered in 1791 in Cornwall by the Reverend William Gregor. He analyzed it and deduced it was made up of the oxides of iron and an unknown metal, and reported it as such to the Royal Geological Society of Cornwall.

In 1795, the German scientist Martin Heinrich Klaproth of Berlin investigated a red ore known as Schörl from Hungary. This is a form of rutile (TiO2) and Klaproth realized it was the oxide of a previously unknown element which he named titanium. When he was told of Gregor’s discovery he investigated menachanite and confirmed it too contained titanium.

It was not until 1910 that M. A. Hunter, working for General Electric in the USA, made pure titanium metal by heating titanium tetrachloride and sodium metal. Continue reading from Royal Society of Chemistry

Is there any element that calls to mind the notion of strength quite like titanium? Named after the Titans, Greek gods of myth, the 22nd element on the Periodic Table appears in airliners and lacrosse sticks, body piercings and medical equipment and even sunscreen. Titanium resists corrosion and is particularly strong and lightweight. It's as strong as steel, but only 45 percent the weight, according to Los Alamos National Laboratory. And it's twice as strong as aluminum, but only 60 percent heavier. Continue reading from LiveScience 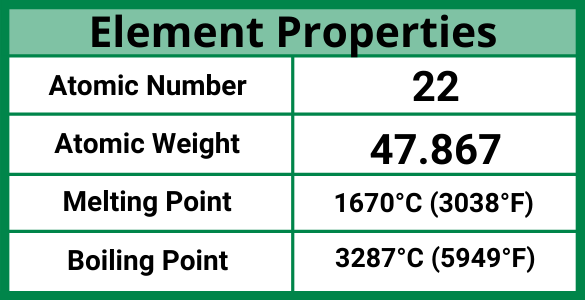 Watch a Video on Titanium