Silver (Ag), chemical element, a white lustrous metal valued for its decorative beauty and electrical conductivity. Silver is located in Group 11 (Ib) and Period 5 of the periodic table, between copper (Period 4) and gold (Period 6), and its physical and chemical properties are intermediate between those two metals. Together with gold and the platinum-group metals, silver is one of the so-called precious metals. Because of its comparative scarcity, brilliant white colour, malleability, ductility, and resistance to atmospheric oxidation, silver has long been used in the manufacture of coins, ornaments, and jewelry.(Continue reading from Encyclopedia Britannica)

Slag heaps near ancient mine workings in Turkey and Greece prove that silver mining started around 3000 BC. The metal was refined by cupellation, a process invented by the Chaldeans, who lived in what is now southern Iraq. It consisted of heating the molten metal in a shallow cup over which blew a strong draft of air. This oxidised the other metals, such as lead and copper, leaving only silver unaffected.

The rise of Athens was made possible partly through the exploitation of local silver mines at Laurium. These operated from 600 BC and right through the Roman era. In Medieval times, German mines became the main source of silver in Europe.

Silver was also mined by the ancient civilizations of Central and South America there being rich deposits in Peru, Bolivia and Mexico. (Continue reading from Royal Society of Chemistry)

Silver forms in star explosions called supernovae, as does gold.

Silver's atomic symbol is Ag, which seems to bear little relation to the name of the element. In fact, Ag is short for argentums, the Latin word for silver. The word "silver" is from the Anglo-Saxon word seolfor.

Give Silver a Shine (Nature) 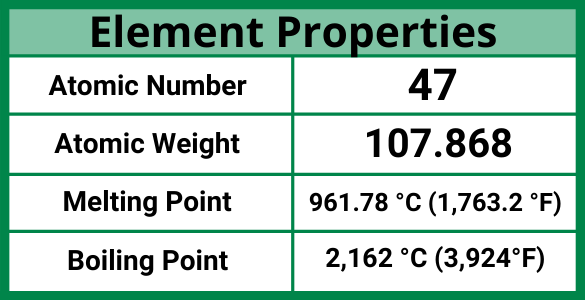