Seaborgium (Sg), an artificially produced radioactive element in Group VIb of the periodic table, atomic number 106. In June 1974, Georgy N. Flerov of the Joint Institute for Nuclear Research at Dubna, Russia, U.S.S.R., announced that his team of investigators had synthesized and identified element 106. In September of the same year, a group of American researchers headed by Albert Ghiorso at the Lawrence Radiation Laboratory (now Lawrence Berkeley Laboratory) of the University of California at Berkeley reported their synthesis of the identical element. (Continue reading from Encyclopedia Britannica)

In 1970, a team led by Albert Ghiorso at the Californian Lawrence Berkeley National Laboratory (LBNL) bombarded californium with oxygen and was successful in producing element 106, isotope 263. In 1974, a team led by Georgy Flerov and Yuri Oganessian at the Russian Joint Institute for Nuclear Research (JINR) bombarded lead with chromium and obtained isotopes 259 and 260.

In September 1974, a team led by Ghiorso at LBNL produced isotope 263, with a half-life of 0.8 seconds, by bombarding californium with oxygen. Several atoms of seaborgium have since been made by this method which produces one seaborgium atom per hour. (Continue reading from Royal Society of Chemistry)

Seaborgium was named for influential American chemist Glenn Seaborg, who was on teams that discovered americium, plutonium, nobelium, mendelevium, berkelium, californium, curium and thorium. He received the Nobel Prize in Chemistry in 1951.

Seaborgium is a synthetic element about which little is known. It is presumed to be a solid metal, but since only a few atoms of it have been created, it is difficult to study.

Only a few atoms of seaborgium have ever been made. Currently, its use is solely for scientific study. (Continue reading from Live Science) 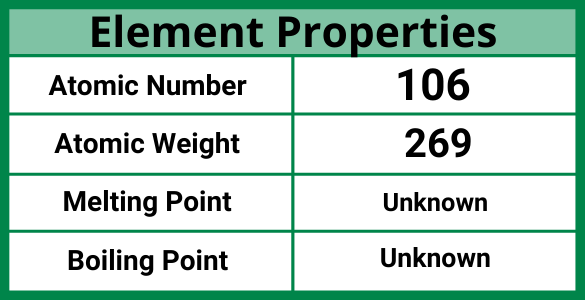