Scandium (Sc), chemical element, a rare-earth metal of Group 3 of the periodic table. Scandium is a silvery white, moderately soft metal. It is fairly stable in air but will slowly change its colour from silvery white to a yellowish appearance because of formation of Sc2O3 oxide on the surface. (Continue reading from Encyclopedia Britannica)

In 1869, Mendeleev noticed that there was a gap in atomic weights between calcium (40) and titanium (48) and predicted there was an undiscovered element of intermediate atomic weight. He forecast that its oxide would be X2O3. It was discovered as scandium in 1879, by Lars Frederik Nilson of the University of Uppsala, Sweden. He extracted it from euxenite, a complex mineral containing eight metal oxides. He had already extracted erbium oxide from euxenite, and from this oxide he obtained ytterbium oxide and then another oxide of a lighter element whose atomic spectrum showed it to be an unknown metal. This was the metal that Mendeleev had predicted and its oxide was Sc2O3. (Continue reading from Royal Society of Chemistry)

Scandium is a silvery metal that is soft and has a density of about three times that of water. Scandium is a transition metal and is also considered a rare earth element due to similar chemical properties (such as difficulty in extracting and in separating from other elements) and existence in the same ores, according to Chemicool.

Scandium is the 31st most abundant element on Earth, according to Periodic Table, with about 22 parts per million abundance by weight in Earth's crust, according to Chemicool.  (Continue reading from Live Science)

An Overview of Scandium (Thought Co.) 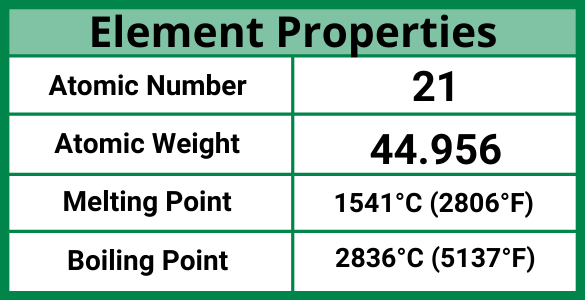