In 1964, a team led by Georgy Flerov at the Russian Joint Institute for Nuclear Research (JINR) in Dubna, bombarded plutonium with neon and produced element 104, isotope 259. They confirmed their findings in 1966.

Rutherfordium is a synthetic element and little is known about its properties. It is presumed to be a solid metal. It is the first transactinide element, and is presumed to have chemical properties similar to hafnium.

Rutherfordium has 12 recognized isotopes with known half-lives. The most stable is 263Rf, which has a half-live of ten minutes. It decays through spontaneous fission.

Rutherfordium is produced artificially and only small amounts have been made. The Dubna scientists produced it by bombarding plutonium with accelerated 113 to 115 MeV neon ions. The Berkeley team produced four isotopes by bombarding 249Cf with 12C nuclei of 71 MeV, and 13C nuclei of 69 MeV.  (Continue reading from Live Science)

The Race for Rutherfordium (Nature Chemistry) 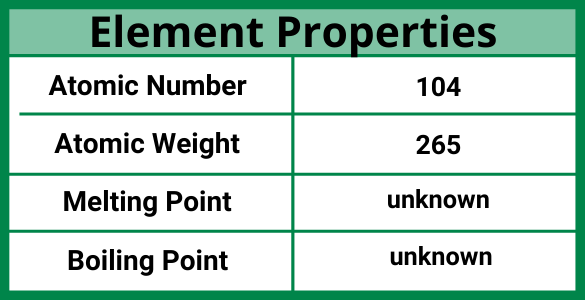