Ruthenium (Ru), chemical element, one of the platinum metals of Groups 8–10 (VIIIb), Periods 5 and 6, of the periodic table, used as an alloying agent to harden platinum and palladium. Silver-gray ruthenium metal looks like platinum but is rarer, harder, and more brittle. The Russian chemist Karl Karlovich Klaus established (1844) the existence of this rare, bright metal and retained the name his countryman Gottfried Wilhelm Osann had suggested (1828) for a platinum-group element whose discovery had remained inconclusive. Ruthenium has a low crustal abundance of about 0.001 part per million. (Continue reading from Encyclopedia Britannica)

The Polish chemist Jedrzej Sniadecki was investigating platinum ores from South America and, in May 1808, when he discovered a new metal which he called it vestium. However, when French chemists tried to repeat his work they were unable to find it in the platinum ore they had. When Sniadecki learned of this he believed he had been mistaken and withdrew his claim.

Then, in 1825, Gottfried Osann of the University of Dorpat (now Tartu) on the Baltic, investigated some platinum from the Ural mountains, and reported finding three new elements which he named pluranium, polinium, and ruthenium.

While the first two of these were never to be verified, the third was genuine and in 1840 Karl Karlovich Klaus at the University of Kazan extracted, purified, and confirmed it was a new metal. He kept Osann’s name of ruthenium. (Continue reading from Royal Society of Chemistry)

Ruthenium is a member of the platinum group. It is a hard, white transition metal. It does not tarnish at room temperatures but oxidizes explosively.

Adding ruthenium is one of the most effective ways to harden platinum and palladium. It is alloyed with these metals to make electrical conducts that are extremely wear resistant.

Like other members of the platinum group, ruthenium occurs natively in mineral deposits in the Ural Mountains and in North and South America. It is also found in the pyroxinite deposits South Africa. (Continue reading from Live Science) 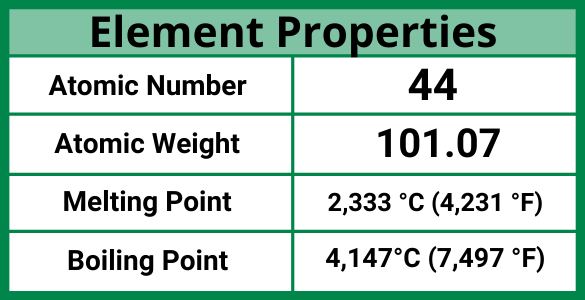