Rhodium (Rh), chemical element, one of the platinum metals of Groups 8–10 (VIIIb), Periods 5 and 6, of the periodic table, predominantly used as an alloying agent to harden platinum. Rhodium is a precious, silver-white metal, with a high reflectivity for light. It is not corroded or tarnished by the atmosphere at room temperature and is frequently electroplated onto metal objects and polished to give permanent, attractive surfaces for jewelry and other decorative articles. The metal is also used to produce reflecting surfaces for optical instruments. (Continue reading from Encyclopedia Britannica)

Rhodium was discovered in 1803 by William Wollaston. He collaborated with Smithson Tennant in a commercial venture, part of which was to produce pure platinum for sale. The first step in the process was to dissolve ordinary platinum in aqua regia (nitric acid + hydrochloric acid). Not all of it went into solution and it left behind a black residue. (Tennant investigated this residue and from it he eventually isolated osmium and iridium.) Wollaston concentrated on the solution of dissolved platinum which also contained palladium. He removed these metals by precipitation and was left with a beautiful red solution from which he obtained rose red crystals. These were sodium rhodium chloride, Na3RhCl6. From them he eventually produced a sample of the metal itself. (Continue reading from Royal Society of Chemistry)

Rhodium is the rarest of the platinum group, only occurring up to one part per 200 million in the Earth's crust, according to Chemistry Libretexts.

Rhodium is resistant to most acids.

The main use for rhodium is in catalytic converters designed to clean vehicle emissions. Rhodium — often together with palladium and/or platinum — accomplishes this by reducing nitrogen oxide in exhaust gas.

Since rhodium is quite brilliant and resistant to tarnishing, it is used as a finish for jewelry, searchlights and mirrors. It is also alloyed with platinum for aircraft turbine engines. (Continue reading from Live Science) 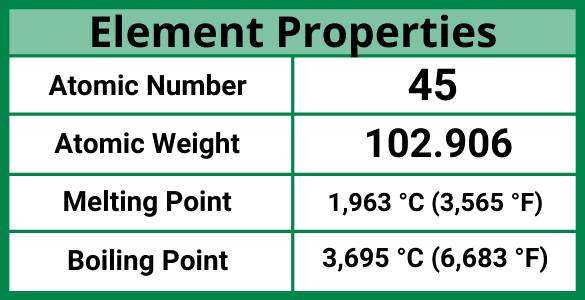