Rhenium (Re), chemical element, a very rare metal of Group 7 (VIIb) of the periodic table and one of the densest elements. Predicted by the Russian chemist Dmitry Ivanovich Mendeleyev (1869) as chemically related to manganese, rhenium was discovered (1925) by the German chemists Ida and Walter Noddack and Otto Carl Berg. The metal and its alloys have found limited application as turbine blades in fighter-jet engines, fountain pen points, high-temperature thermocouples (with platinum), catalysts, electrical contact points, and instrument-bearing points and in electrical components, such as in flashbulb filaments as an alloy with tungsten. (Continue reading from Encyclopedia Britannica)

The periodic table had two vacant slots below manganese and finding these missing elements, technetium and rhenium, proved difficult. Rhenium was the lower one and indeed it was the last stable, non-radioactive, naturally-occurring element to be discovered. In 1905, Masataka Ogawa found it in the mineral thorianite from Sri Lanka. He realised from lines in its atomic spectrum that it contained an unknown element. He wrongly thought it was the one directly below manganese and so his claim was discounted at the time. However, a re-examination of Ogawa’s original photographic spectra proved he had discovered rhenium.

The isolation of rhenium was finally achieved in May 1925 by Walter Noddack and Ida Tacke working in Berlin. They concentrated it from the ore gadolinite in which it was an impurity. (Continue reading from Royal Society of Chemistry)

Rhenium wire is used in flash photography. It is used in hydrogenation of fine chemicals and as an additive to tungsten and molybdenum-based alloys.

Rhenium is a silvery white element with a metallic luster. It has a high density point exceeded only by platinum, iridium and osmium, and its melting point is exceeded only by tungsten and carbon. (Continue reading from Live Science) 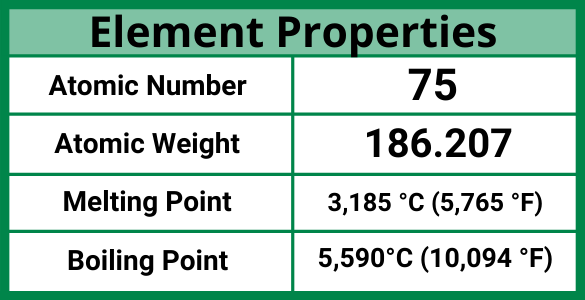