Platinum (Pt), chemical element, the best known and most widely used of the six platinum metals of Groups 8–10, Periods 5 and 6, of the periodic table. A very heavy, precious, silver-white metal, platinum is soft and ductile and has a high melting point and good resistance to corrosion and chemical attack. For example, its surface remains bright after being brought to white heat in air, and, though it readily dissolves in aqua regia, it is scarcely attacked by simple acids. (It does dissolve slowly in hydrochloric acid in the presence of air.) (Continue reading from Encyclopedia Britannica)

Probably the oldest worked specimen of platinum is that from an ancient Egyptian casket of the 7th century BC, unearthed at Thebes and dedicated to Queen Shapenapit. Otherwise this metal was unknown in Europe and Asia for the next two millennia, although on the Pacific coast of South America, there were people able to work platinum, as shown by burial goods dating back 2000 years.

In 1557 an Italian scholar, Julius Scaliger, wrote of a metal from Spanish Central America that could not be made to melt and was no doubt platinum. Then, in 1735, Antonio Ulloa encountered this curious metal, but as he returned to Europe his ship was captured by the Royal Navy and he ended up in London. There, members of the Royal Society were most interested to hear about the new metal, and by the 1750s, platinum was being reported and discussed throughout Europe. (Continue reading from Royal Society of Chemistry)

Platinum, a highly valued and desired metal, has a wide range of uses, including jewelry, catalytic converters, electrical contacts, pacemakers, medication and magnets.

Back in the 18th century, platinum was the eighth known metal and was known as "white gold," according to van der Krogt.

A cylindrical hunk of platinum and platinum alloy is used as the international standard for measuring a kilogram.

The majority (about 80 percent) of platinum is mined in South Africa. (Continue reading from Live Science) 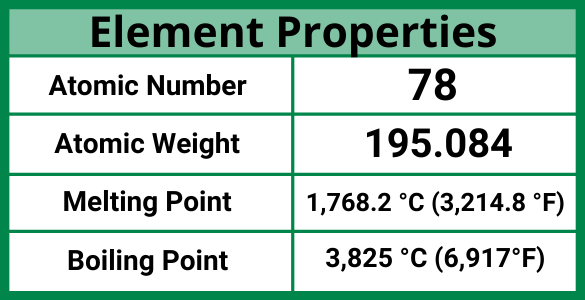