Palladium (Pd), chemical element, the least dense and lowest-melting of the platinum metals of Groups 8–10 (VIIIb), Periods 5 and 6, of the periodic table, used especially as a catalyst (a substance that speeds up chemical reactions without changing their products) and in alloys. A precious gray-white metal, palladium is extremely ductile and easily worked. Palladium is not tarnished by the atmosphere at ordinary temperatures. Thus, the metal and its alloys serve as substitutes for platinum in jewelry and in electrical contacts; the beaten leaf is used for decorative purposes. (Continue reading from Encyclopedia Britannica)

As early as 1700, miners in Brazil were aware of a metal they called ouro podre, ‘worthless gold,’ which is a native alloy of palladium and gold. However, it was not from this that palladium was first extracted, but from platinum, and this was achieved in 1803 by William Wollaston. He noted that when he dissolved ordinary platinum in aqua regia (nitric acid + hydrochloric acid) not all of it went into solution.

It left a residue from which he eventually extracted palladium. He did not announce his discovery but put the new metal on sale as a ‘new silver’. Richard Chenevix purchased some, investigated it, and declared it to be an alloy of mercury and platinum. In February 1805 Wollaston revealed himself as its discoverer and gave a full and convincing account of the metal and its properties. (Continue reading from Royal Society of Chemistry)

Palladium gets its name from Pallas, the second-largest asteroid in the asteroid belt, which had just been discovered in 1802.

Palladium is malleable and doesn't tarnish in air, making it a popular metal for jewelry.

Finding this rare element can be a challenge. All six platinum-group elements put together make up only 0.0005 parts per million of Earth's crust, according to U.S. Geological Survey. 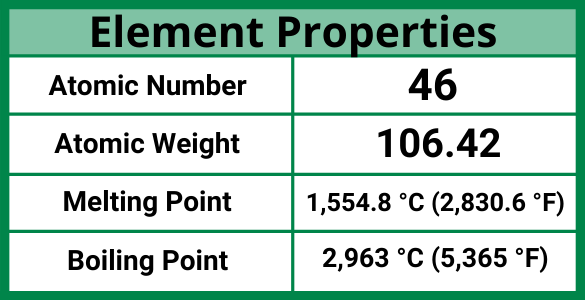