Osmium (Os), chemical element, one of the platinum metals of Groups 8–10 (VIIIb), Periods 5 and 6, of the periodic table and the densest naturally occurring element. A gray-white metal, osmium is very hard, brittle, and difficult to work, even at high temperatures. Of the platinum metals it has the highest melting point, so fusing and casting are difficult. Osmium wires were used for filaments of early incandescent lamps before the introduction of tungsten. It has been used chiefly as a hardener in alloys of the platinum metals, though ruthenium has generally replaced it. Continue reading from Encyclopedia Britannica

In 1803, Smithson Tennant added platinum to dilute aqua regia, which is a mixture of nitric and hydrochloric acids, and observed that not all the metal went into solution. Earlier experimenters had assumed that the residue was graphite, but he suspected it was something else, and he began to investigate it. By a combination of acid and alkali treatments he eventually separated it into two new metal elements, which he named iridium and osmium, naming the latter on account of the strong odour it gave off. Its name is derived from osme the Greek word for smell. Although it was recognised as a new metal, little use was made of it because it was rare and difficult to work with, although it was extremely hard wearing and for several years it was used for pen nibs and gramophone needles. Continue reading from Royal Society of Chemistry

Osmium comes from the Greek term osme, which means smell, scent, odor. When naturally combined with iridium, it is used in fountain pen tips. Osmium is produced as a by-product of nickel refining. The element occurs in the mineral iridosule and in platinum-bearing river sands in the Urals, North America and South America. Within the platinum group, osmium has the highest melting point and the lowest vapor pressure. Continue reading from LiveScience 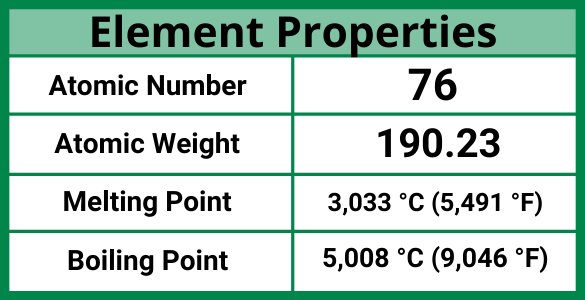 Watch a Video on Osmium