Nickel is a hard, silvery-white metal whose strength, ductility and resistance to heat and corrosion make it extremely useful for the development of a wide variety of materials — from wires to coins to military equipment.

This extremely useful metal is No. 28 in the periodic table of the elements, between the elements cobalt and copper. Nickel is a fairly good conductor of electricity and heat and is one of only four elements (cobalt, iron, nickel and gadolinium) that are ferromagnetic (magnetized easily) at room temperature. (Continue reading from Live Science)

Meteorites contain both iron and nickel, and earlier ages used them as a superior form of iron. Because the metal did not rust, it was regarded by the natives of Peru as a kind of silver. A zinc-nickel alloy called pai-t’ung (white copper) was in use in China as long ago as 200 BC. Some even reached Europe.

In 1751, Axel Fredrik Cronstedt, working at Stockholm, investigated a new mineral – now called nickeline (NiAs) – which came from a mine at Los, Hälsingland, Sweden. He thought it might contain copper but what he extracted was a new metal which he announced and named nickel in 1754. Many chemists thought it was an alloy of cobalt, arsenic, iron and copper – these elements were present as trace contaminants. (Continue reading from Royal Society of Chemistry)

Nickel is typically found in two types of deposits: laterite deposits, which are the result of intensive weathering of surface nickel-rich rocks, and magmatic sulfide deposits. (Continue reading from Live Science) 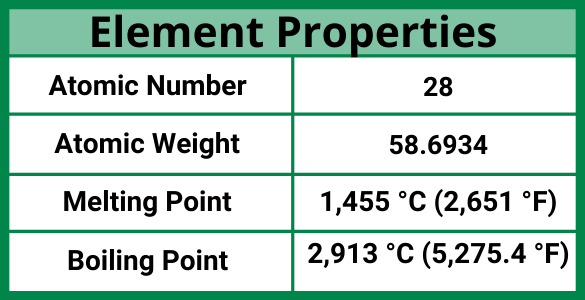