Mercury is a transition metal. A transition metal is one of the elements found between Groups 2 (IIA) and 13 (IIIA) on the periodic table. The periodic table is a chart that shows how chemical elements are related to one another. Mercury has long been known as quicksilver, because it is a silver liquid. The chemical symbol also reflects this property. The symbol, Hg, comes from the Latin term hydrargyrum, meaning "watery silver."

Mercury has been known for thousands of years. In many cultures, people learned to make mercury metal from its most important ore, cinnabar. When heated cinnabar releases mercury as a vapor (gas).  (Continue reading from Chemistry Explained)

Cinnabar (aka vermilion, mercury sulfide, HgS), was used as a bright red pigment by the Palaeolithic painters of 30,000 years ago to decorate caves in Spain and France. Cinnabar would yield up its mercury simply on heating in a crucible, and the metal fascinated people because it was a liquid that would dissolve gold. The ancients used in on a large scale to extract alluvial gold from the sediment of rivers.

The Almadén deposit in Spain provided Europe with its mercury. In the Americas, it was the Spanish conquerors who exploited the large deposits of cinnabar at Huancavelica in order to extract gold.  (Continue reading from Royal Society of Chemistry)

Mercury looks pretty, in its shiny, fast-moving liquid form, but don't touch! It can be extremely poisonous to humans.

The symbol Hg that mercury is known by comes from its Greek name, hydrargyrum, which means "liquid silver" — to reflect its shiny surface. The element is also known as quicksilver for its mobility. Named after the fastest-moving planet in the solar system, mercury has been known to humanity for ages. In fact, evidence of its use has been found in China, India and Egypt, and traces of mercury were found in 3,500-year-old Egyptian tombs.  (Continue reading from Live Science) 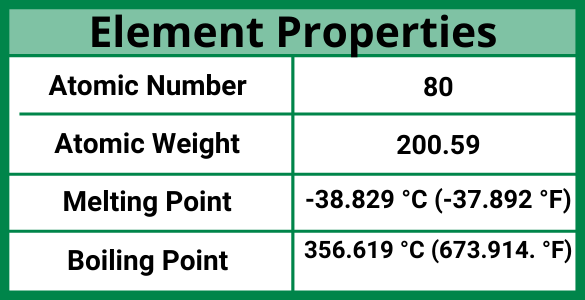