Iron (Fe), chemical element, metal of Group 8 (VIIIb) of the periodic table, the most-used and cheapest metal. Iron makes up 5 percent of Earth’s crust and is second in abundance to aluminum among the metals and fourth in abundance behind oxygen, silicon, and aluminum among the elements.(Continue reading from Encyclopedia Britannica)

Iron objects have been found in Egypt dating from around 3500 BC. They contain about 7.5% nickel, which indicates that they were of meteoric origin.

The ancient Hittites of Asia Minor, today’s Turkey, were the first to smelt iron from its ores around 1500 BC and this new, stronger, metal gave them economic and political power. The Iron Age had begun. Some kinds of iron were clearly superior to others depending on its carbon content, although this was not appreciated. Some iron ore contained vanadium producing so-called Damascene steel, ideal for swords.

The first person to explain the various types of iron was René Antoine Ferchault de Réaumur who wrote a book on the subject in 1722. This explained how steel, wrought iron, and cast iron, were to be distinguished by the amount of charcoal (carbon) they contained. The Industrial Revolution which began that same century relied extensively on this metal. (Continue reading from Royal Society of Chemistry) 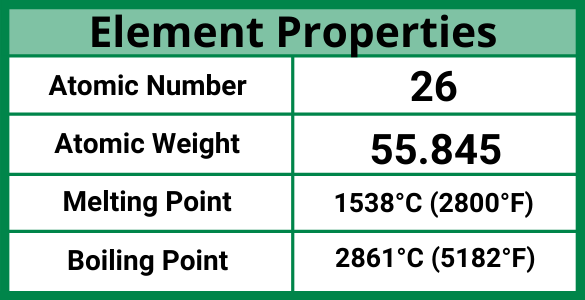