Iridium (Ir), chemical element, one of the platinum metals of Groups 8–10 (VIIIb), Periods 5 and 6, of the periodic table. It is very dense and rare and is used in platinum alloys. A precious, silver-white metal, iridium is hard and brittle, but it becomes ductile and can be worked at a white heat, from 1,200° to 1,500° C (2,200° to 2,700° F). It is one of the densest terrestrial substances. In the massive state the metal is practically insoluble in acids and is not attacked even by aqua regia. Because of difficulties in preparation and fabrication, the pure metal has few applications. (Continue reading from Encyclopedia Britannica)

Iridium was discovered together with osmium in1803 by Smithson Tennant in London. When crude platinum was dissolved in dilute aqua regia, which is a mixture of nitric and hydrochloric acids, it left behind a black residue thought to be graphite. Tennant thought otherwise, and by treating it alternately with alkalis and acids he was able to separate it into two new elements. These he announced at the Royal Institution in London, naming one iridium, because its salts were so colourful and the other osmium because it had a curious odour (see osmium).

Despite its seeming intractability, a group of chemists, including the great Humphry Davy, demonstrated in 1813 that iridium would indeed melt like other metals. To achieve this they exposed it to the powerful current generated by a large array of batteries. (Continue reading from Royal Society of Chemistry)

Pure iridium is so rare on the Earth's crust that there is only about 2 parts per billion located in the crust, according to Chemistry Explained.

Iridium is commercially recovered as a byproduct of copper or nickel mining. Ore containing iridium is found in Brazil, the United States, Myanmar, South Africa, Russia and Australia.

The name iridium comes from the Latin word iris, which means rainbow. Though the metal itself isn't rainbow colored, it is called this because of its multi-colored compounds.

A compound of osmium and iridium, called osmiridium, is used in fountain pen tips and compass bearings. (Continue reading from Live Science)

A touch of iridium (Nature) 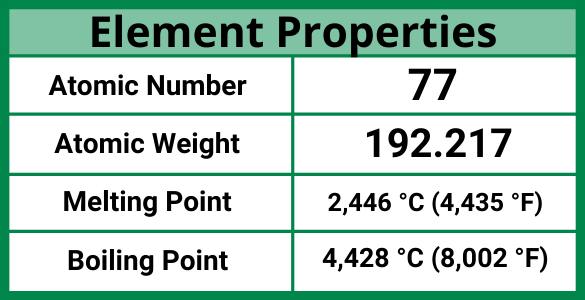