Gold (Au), chemical element, a dense lustrous yellow precious metal of Group 11 (Ib), Period 6, of the periodic table. Gold has several qualities that have made it exceptionally valuable throughout history. It is attractive in colour and brightness, durable to the point of virtual indestructibility, highly malleable, and usually found in nature in a comparatively pure form. The history of gold is unequaled by that of any other metal because of its perceived value from earliest times. (Continue reading from Encyclopedia Britannica)

Gold has been known since prehistoric times and was one of the first metals to be worked, mainly because it was to be found as nuggets or as particles in the beds of streams. Such was the demand that by 2000 BC the Egyptians began mining gold. The death mask of Tutankhamen, who died in 1323 BC, contained 100 kg of the metal. The royal graves of ancient Ur (modern Iraq), which flourished from 3800 to 2000 BC, also contained gold objects.

The minting of gold coins began around 640 BC in the Kingdom of Lydia (situated in what is now modern Turkey) using electrum, a native alloy of gold and silver. The first pure gold coins were minted in the reign of King Croesus, who ruled from 561–547 BC. (Continue reading from Royal Society of Chemistry)

All the gold that makes up earrings and cufflinks and electronics components today originated in space: According to a 2011 paper in the journal Nature, a meteor bombardment nearly 4 billion years ago brought 20 billion billion tons of a gold-and-precious-metal-rich space rock to Earth.

Seventy-eight percent of the world's yearly supply of gold is used in jewelry, according to the AMNH. The rest goes to electronics and dental and medical uses.

The atomic symbol of gold, Au, comes from the Latin word for gold, aurum.

Gold is an excellent conductor of electricity and is very non-reactive with air, water and most other substances, meaning it won't corrode or tarnish. (Continue reading from Live Science) 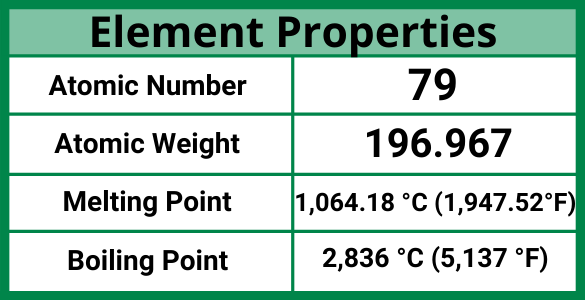