Dubnium (Db), an artificially produced radioactive transuranium element in Group Vb of the periodic table, atomic number 105. The discovery of dubnium (element 105), like that of rutherfordium (element 104), has been a matter of dispute between Soviet and American scientists. The Soviets may have synthesized a few atoms of element 105 in 1967 at the Joint Institute for Nuclear Research in Dubna, Russia, U.S.S.R., by bombarding americium-243 with neon-22 ions, producing isotopes of element 105 having mass numbers of 260 and 261 and half-lives of 0.1 second and 3 seconds, respectively. (Continue reading from Encyclopedia Britannica)

In 1968, a team led by Georgy Flerov at the Russian Joint Institute for Nuclear Research (JINR) bombarded americium with neon and made an isotope of element 105. In 1970, a team led by Albert Ghiorso at the American Lawrence Berkeley Laboratory (LBL) bombarded californium with neon and obtained isotope 261. They disputed the claim of the JINR people. The two groups gave it different names. The Russians called it neilsbohrium, while the Americans called it hahnium, both being derived from the names of prominent nuclear scientists.

Eventually, the International Union of Pure and Applied Chemistry (IUPAC) decided it should be called dubnium. (Continue reading from Royal Society of Chemistry)

Though the International Union of Pure and Applied Chemistry (IUPAC) endorsed the name dubnium, some scientists still refer to the element as “hahnium.”

Dubnium has seven recognized isotopes. The most stable is 268Db, which has a half-life of about 32 hours. It decays through spontaneous fission.

For naturally occurring elements, the atomic weight is calculated from averaging the weights of the natural abundances of the isotopes of that element. However, for manmade transuranium elements, there is no "natural" abundance. (Continue reading from Live Science) 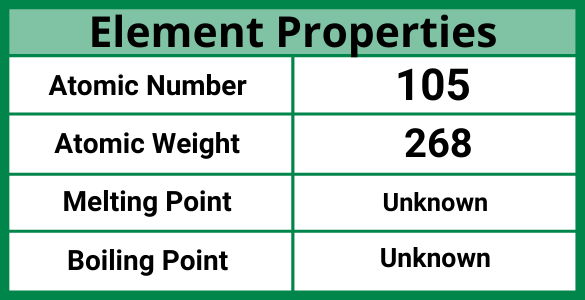