Cooper (Cu), chemical element,  was the first metal manipulated by humans, and it remains an important metal in industry today. The oldest metal object found in the Middle East consists of copper; it was a tiny awl dating back as far as 5100 B.C. And the U.S. penny was originally made of pure copper (although, nowadays, it is 97.5 percent zinc with a thin copper skin). (Continue reading from Live Science)

Copper beads have been excavated in northern Iraq and which are more than ten thousand years old and presumably made from native copper, nuggets of which can sometimes be found. Copper was widely used in the ancient world as bronze, its alloy with tin, which was used to make cutlery, coins, and tools. In China it was used for bells. Copper is not difficult to extract from it ores, but mineable deposits were relatively rare. Some, such as the copper mine at Falun, Sweden, date from the 1200s, were the source of great wealth. (Continue reading from Royal Society of Chemistry)

According to Peter van der Krogt, a Dutch historian, the word "copper" has several roots, many of which come from the Latin word cuprum that was derived from the phrase Cyprium aes, which means "a metal from Cyprus," as much of the copper used at the time was mined in Cyprus.

If all of the copper wiring in an average car were laid out, it would stretch 0.9 miles (1.5 km), according to the USGS.

The electrical conductance (how readily a current can flow through the metal) of copper is second only to that of silver, according to the Jefferson Laboratory. (Continue reading from Live Science) 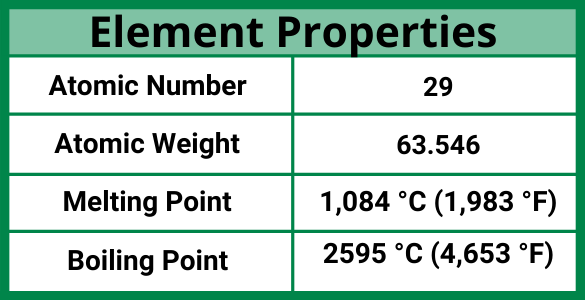