Cobalt (Co), chemical element, ferromagnetic metal of Group 9 (VIIIb) of the periodic table, used especially for heat-resistant and magnetic alloys. The metal was isolated (c. 1735) by Swedish chemist Georg Brandt, though cobalt compounds had been used for centuries to impart a blue color to glazes and ceramics.(Continue reading from Encyclopedia Britannica)

The tomb of Pharaoh Tutankhamen, who ruled from 1361-1352 BC, contained a small glass object coloured deep blue with cobalt. Cobalt blue was known even earlier in China and was used for pottery glazes.

In 1730, chemist Georg Brandt of Stockholm became interested in a dark blue ore from some local copper workings and he eventually proved that it contained a hitherto unrecognised metal and he gave it the name by which its ore was cursed by miners in Germany, where it was sometimes mistaken for a silver ore. He published his results in 1739. For many years his claim to have uncovered a new metal was disputed by other chemists who said his new element was really a compound of iron and arsenic, but eventually it was recognised as an element in its own right. (Continue reading from Royal Society of Chemistry)

In pure form, cobalt is silvery-blue and brittle. It is similar to iron and nickel, according to the Environmental Protection Agency, and — like iron — can be made magnetic. As a result, some high-powered magnets are made from alloys of cobalt and aluminum or nickel, according to the Royal Society of Chemistry. A manmade isotope, Cobalt-60, is commonly used in cancer treatments; the gamma radiation released by this radioactive isotope can target tumors, according to the American Brain Tumor Association, particularly brain tumors that need precision treatment. (Continue reading from Live Science) 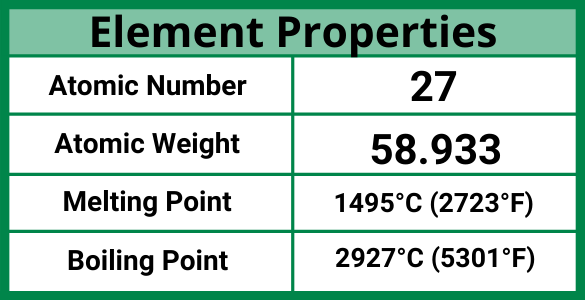