Cadmium (Cd), chemical element, a metal of Group 12 (IIb, or zinc group) of the periodic table. Silver-white and capable of taking a high polish, cadmium is nearly as soft as tin and, like tin, emits a crackling sound when bent; it can be rolled out into sheets. Cadmium melts and boils at relatively low temperatures; its vapour is deep yellow and monatomic. The metal is permanent in dry air, becomes coated with the oxide in moist air, burns on heating to redness, and is readily soluble in mineral acids. (Continue reading from Encyclopedia Britannica)

In the early 1800s, the apothecaries of Hanover, Germany, made zinc oxide by heating a naturally occurring form of zinc carbonate called cadmia. Sometimes the product was discoloured instead of being pure white, and when Friedrich Stromeyer of Göttingen University looked into the problem he traced the discoloration to a component he could not identify, and which he deduced must be an unknown element. This he separated as its brown oxide and, by heating it with lampblack (carbon), he produced a sample of a blue-grey metal which he named cadmium after the name for the mineral. That was in 1817. Meanwhile two other Germans, Karl Meissner in Halle, and Karl Karsten in Berlin, were working on the same problem and announced their discovery of cadmium the following year. (Continue reading from Royal Society of Chemistry)

According to the Jefferson Laboratory, the name cadmium comes from the Latin word cadmia and the Greek word kadmeia, which are ancient names for calamine

Vincent van Gogh was a prominent user of cadmium-pigmented paint and used a variety of the reds, oranges and yellows it produced

Cadmium is toxic and can lead to cadmium poisoning. It wasn't widely known that cadmium was toxic until the Industrial Revolution in the mid-19th century, according to Dartmouth University, when the mining and production of cadmium and other metals greatly increased. (Continue reading from Live Science)

A Portrait of Cadmium (Science Notes) 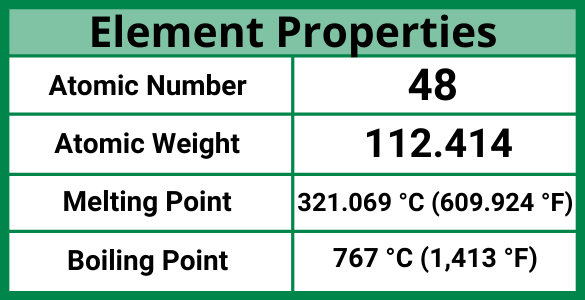