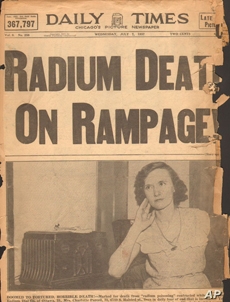 By the mid-1920s, dial painters were falling ill by the dozens, afflicted with horrific diseases. The radium they had swallowed was eating their bones from the inside.

"There was one woman who the dentist went to pull a tooth and he pulled her entire jaw out when he did it," says Blum. "Their legs broke underneath them. Their spines collapsed."

Dozens of women died. At a factory in New Jersey, the women sued the U.S. Radium Corp. for poisoning and won. Many of them ended up using the money to pay for their own funerals.

In all, by 1927, more than 50 women had died as a direct result of radium paint poisoning. (Continue reading from NPR)

Ever since the glowing element had been discovered, it had been known to cause harm; Marie Curie herself had suffered radiation burns from handling it. People had died of radium poisoning before the first dial painter ever picked up her brush. That was why the men at the radium companies wore lead aprons in their laboratories and handled the radium with ivory-tipped tongs. Yet the dial painters were not afforded such protection, or even warned it might be necessary.

That was because, at that time, a small amount of radium — such as the girls were handling — was believed to be beneficial to health: People drank radium water as a tonic, and one could buy cosmetics, butter, milk, and toothpaste laced with the wonder element. Newspapers reported its use would "add years to our lives!"

But that belief was founded upon research conducted by the very same radium firms who had built their lucrative industry around it. They ignored all the danger signs; when asked, managers told the girls the substance would put roses in their cheeks. (Continue reading from Buzzfeed)

Who are the Radium Girls?

A century ago, glow-in-the-dark watches were an irresistible novelty. The dials, covered in a special luminous paint, shone all the time and didn't require charging in sunlight. It looked like magic.

One of the first factories to produce these watches opened in New Jersey in 1916. It hired about 70 women, the first of thousands to be employed in many such factories in the United States. It was a well-paid, glamorous job.

For the delicate task of applying the paint to the tiny dials, the women were instructed to point the brushes with their lips. But the paint made the watches glow because it contained radium, a radioactive element discovered less than 20 years earlier, its properties not yet fully understood. The women were ingesting it with nearly every brushstroke. They became known as the "Radium Girls."

Radium was discovered by Nobel laureate Marie Curie and her husband Pierre in 1898. It was quickly put to use as a cancer treatment. "Because it was successful, it somehow became an all-powerful health tonic, taken in the same way as we take vitamins today -- people were fascinated with its power," said Kate Moore, author of "The Radium Girls," in a phone interview. It was a proper craze. Radium became an additive in a number of everyday products, from toothpaste to cosmetics and even food and drinks. (Continue reading from CNN)

On April 20, 1902, Marie and Pierre Curie successfully isolate radioactive radium salts from the mineral pitchblende in their laboratory in Paris. In 1898, the Curies discovered the existence of the elements radium and polonium in their research of pitchblende. One year after isolating radium, they would share the 1903 Nobel Prize in physics with French scientist A. Henri Becquerel for their groundbreaking investigations of radioactivity.

She became interested in the medical applications of radioactive substances, working on radiology during World War I and the potential of radium as a cancer therapy. Beginning in 1918, the Radium Institute at the University of Paris began to operate under Curie’s direction and from its inception was a major center for chemistry and nuclear physics. In 1921, she visited the United States, and President Warren G. Harding presented her with a gram of radium.

Curie’s daughter, Irene Curie, was also a physical chemist and, with her husband, Frederic Joliot, was awarded the 1935 Nobel Prize in chemistry for the discovery of artificial radioactivity. Marie Curie died in 1934 from leukemia caused by four decades of exposure to radioactive substances. (Continue reading from History.com)