Bohrium (Bh), a synthetic element in Group VIIb of the periodic table. It is thought to be chemically similar to the rare metal rhenium. In 1976 Soviet scientists at the Joint Institute for Nuclear Research in Dubna, Russia, U.S.S.R., announced that they had synthesized element 107, later given the official name bohrium, by bombarding a target of bismuth-209 with ions of chromium-54. The resultant collisions were reported to have produced an isotope of the element with a mass number of 261 and a half-life of 1–2 milliseconds. (Continue reading from Encyclopedia Britannica)

In 1975 a team led by Yuri Oganessian at the Russian Joint Institute for Nuclear Research (JINR) in Dubna, bombarded bismuth with chromium and produced element 107, isotope-261. They published the results of their successful run in 1976 and submitted a discovery claim.

In 1981, a team led by Peter Armbruster and Gottfried Münzenberg at the German nuclear research institute the Geselleschaft für Schwerionenforschung (GSI) bombarded bismuth with chromium and they succeeded in making a single atom of isotope 262. Now followed a period of negotiation to establish who discovered elements 107 first and thereby had the right to name it.

The International Union of Pure and Applied Chemistry (IUPAC) said that the GSI should be awarded the discovery because they had the more credible submission, but that the JINR were probably the first to make it. (Continue reading from Royal Society of Chemistry)

Bohrium was named for Danish physicist Niels Bohr. For a time, it was known as nielsbohrium with the symbol Ns.

Bohrium is a synthetic element about which little is known. It is presumed to be a solid metal, but since only a few atoms of it have been created, it is difficult to study.

The Dubna team created it by bombarding bismuth-204 (204Bi) with heavy nuclei of chromium-54 (54Cr). A rapidly rotating cylinder, coated with a thin layer of bismuth, was used as a target and bombarded with a stream of chromium fired tangentially. This technique allowed the scientists to “glimpse” the new element for 0.002 seconds. (Continue reading from Live Science) 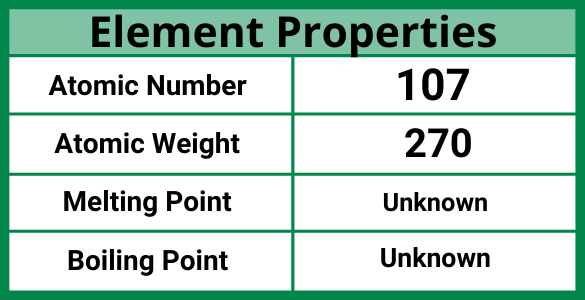