Why was there a Berlin Wall?

On August 13, 1961, the Communist government of the German Democratic Republic (GDR, or East Germany) began to build a barbed wire and concrete “Antifascistischer Schutzwall,” or “antifascist bulwark,” between East and West Berlin.

The official purpose of this Berlin Wall was to keep Western “fascists” from entering East Germany and undermining the socialist state, but it primarily served the objective of stemming mass defections from East to West.

The Berlin Wall stood until November 9, 1989, when the head of the East German Communist Party announced that citizens of the GDR could cross the border whenever they pleased. That night, ecstatic crowds swarmed the wall.

Some crossed freely into West Berlin, while others brought hammers and picks and began to chip away at the (Continue Reading from History Channel)

At the end of the Second World War, Germany was divided into four zones of occupation under the control of the United States, Britain, France and the Soviet Union.  Berlin, although located within the Soviet Zone, was also split amongst the four powers.

The American, British and French sectors would form West Berlin and the Soviet sector became East Berlin. The division of Germany and the nature of its occupation had been confirmed by the Allied leaders at the Potsdam Conference, held between 17 July and 2 August 1945. (Continue Reading from the Imperial War Museums)

Read After the Berlin Wall: Putting Two Germanys Back Together Again

Listen to The Fall of the Berlin Wall: Reassessing the Causes and Consequences of the End of the Cold War 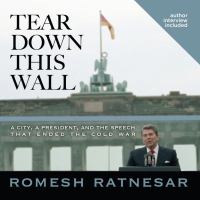 Listen to Tear Down This Wall

Read Burning Down the Haus: Punk Rock, Revolution and the Fall of the Berlin Wall

Read The Collapse: the Accidental Opening of the Berlin Wall

Read Checkpoint Charlie: the Cold War, the Berlin Wall, and the Most Dangerous Place on Earth

Read The Year that Changed the World