Compounds of zirconium have been known for centuries. Yet, the element itself was not recognized until 1789. In that year, German chemist Martin Heinrich Klaproth (1743-1817) discovered the element in a stone brought to him from the island of Ceylon (now Sri Lanka).

Gems that contain zirconium were known in ancient times as zircon. In 1789, the German chemist, Martin Klaproth analysed a zircon and separated zirconium in the form of its ‘earth’ zirconia, which is the oxide ZrO2.

Klaproth failed to isolate the pure metal itself, and Humphry Davy also failed when he tried electrolysis in 1808. It was not until 1824 that the element was isolated, when the Swedish chemist Jöns Berzelius heated potassium hexafluorozirconate (K2ZrF6) with potassium metal and obtained some zirconium as a black powder.

Totally pure zirconium was only produced in 1925 by the Dutch chemists Anton Eduard van Arkel and Jan Hendrik de Boer by the decomposition of zirconium tetraiodide (ZrI4). These days the metal is produced in bulk by heating zirconium tetrachloride (ZrCl4) with magnesium. (Continue reading from Royal Society of Chemistry)

Zirconium is a silver-gray transition metal, a type of element that is malleable and ductile and easily forms stable compounds. It is also highly resistant to corrosion. Zirconium and its alloys have been used for centuries in a wide variety of ways.

It is commonly used in corrosive environments. Zirconium alloys can be found in pipes, fittings and heat exchangers, according to Chemicool. Zirconium is also used in steel alloys, colored glazes, bricks, ceramics, abrasives, flashbulbs, lamp filaments, artificial gemstones and some deodorants, according to Minerals Education Coalition.   (Continue reading from Live Science)

The A tot Z of Zirconium (Nature Chemistry) 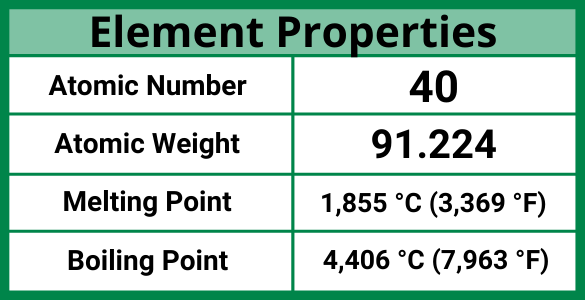