Zinc (Zn), chemical element, a low-melting metal of Group 12 (IIb, or zinc group) of the periodic table, that is essential to life and is one of the most widely used metals. Zinc is of considerable commercial importance. (Continue reading from Encyclopedia Britannica)

Zinc was known to the Romans but rarely used. It was first recognised as a metal in its own right in India and the waste from a zinc smelter at Zawar, in Rajasthan, testifies to the large scale on which it was refined during the period 1100 to the 1500.

Zinc refining in China was carried out on a large scale by the 1500s. An East India Company ship which sank off the coast of Sweden in 1745 was carrying a cargo of Chinese zinc and analysis of reclaimed ingots showed them to be almost the pure metal.

In 1668, a Flemish metallurgist, P. Moras de Respour, reported the extraction of metallic zinc from zinc oxide, but as far as Europe was concerned zinc was discovered by the German chemist Andreas Marggraf in 1746, and indeed he was the first to recognise it as a new metal. (Continue reading from Royal Society of Chemistry)

Zinc may be the only known cure for the common cold — sort of. According to the NIH, medical studies have found that if zinc lozenges or spray are used within 24 hours of the onset of symptoms, the length of a cold is reduced. However, these over-the-counter treatments should be used with caution, because no optimal dosing has been established, and too much zinc from nasal gels or sprays has been linked to permanent loss of the sense of smell. Might be worth keeping the cold for another day or two.

A zinc compound, zinc gluconate, can take the sting out of deadly box jellyfish venom by stopping the leakage of potassium from blood cells, according to 2012 research.

There's zinc in your pocket: Pennies are 97.5 percent zinc and only 2.5 percent copper.

Zinc makes up 70 milligrams of every kilogram of the Earth's crust, on average, according to the IZA. (Continue reading from Live Science) 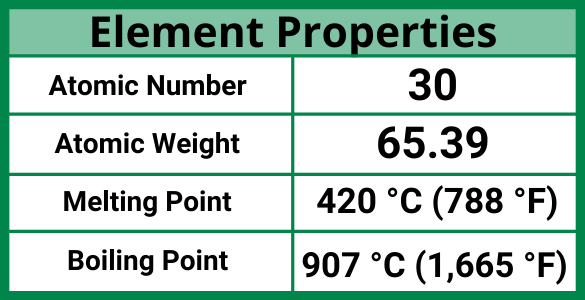