In 1787, Karl Arrhenius came across an unusual black rock in an old quarry at Ytterby, near Stockholm. He thought he had found a new tungsten mineral, and passed the specimen over to Johan Gadolin based in Finland. In 1794, Gadolin announced that it contained a new 'earth' which made up 38 per cent of its weight. It was called an’ earth’ because it was yttrium oxide, Y2O3, which could not be reduced further by heating with charcoal.

The metal itself was first isolated in 1828 by Friedrich Wöhler and made by reacting yttrium chloride with potassium. Yet, yttrium was still hiding other elements.

However, yttrium is seldom used on its own. Instead, researchers use it to form compounds, such as yttrium barium copper oxide (YBCO) — which helped usher in a new phase of high-temperature superconductivity research. Yttrium is also added to metal alloys to help improve resistance to corrosion and oxidation.   (Continue reading from Live Science) 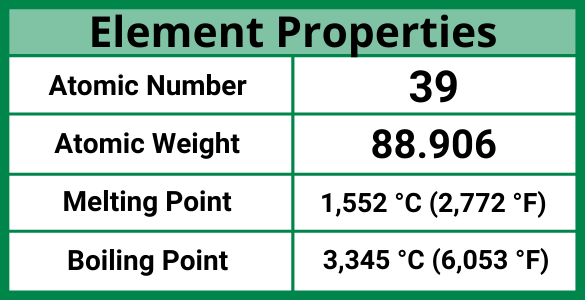