Vanadium was discovered twice. The first time was in 1801 by Andrés Manuel del Rio who was Professor of Mineralogy in Mexico City. He found it in a specimen of vanadite, Pb5(VO4)3Cl and sent a sample to Paris. However, French chemists concluded that it was a chromium mineral.

The second time vanadium was discovered was in 1831 by the Swedish chemist Nil Gabriel Selfström at Stockholm. He separated it from a sample of cast iron made from ore that had been mined at Småland. He was able to show that it was a new element, and in so doing he beat a rival chemist, Friedrich Wöhler, to the discovery He was also working another vanadium mineral from Zimapan.

Pure vanadium was produced by Henry Roscoe at Manchester, in 1869, and he showed that previous samples of the metal were really vanadium nitride (VN). (Continue reading from Royal Society of Chemistry)

Vanadium is a medium-hard, steel-blue metal. Although a lesser-known metal, it is quite valuable in the manufacturing industry due to its malleable, ductile and corrosion-resistant qualities.

Vanadium rarely exists as a free element in nature but can be found in about 65 different minerals, including magnetite, vanadinite, carnotite and patronite. It also can be found in phosphate rock and some crude oils. Vanadium is usually obtained by heating crushed ore in the presence of carbon and chlorine to produce vanadium trichloride, which is then heated with magnesium in an argon atmosphere, according to Jefferson Lab. Around 98 percent of mined vanadium ore comes from South Africa, Russia, and China. (Continue reading from Live Science) 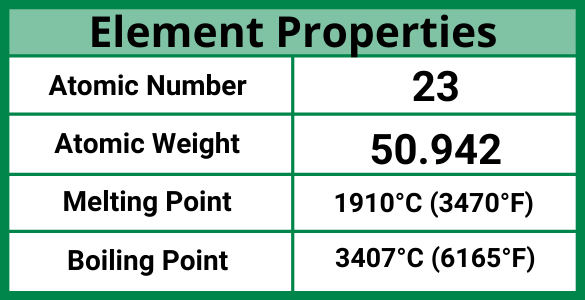