Tungsten is a transition metal. The transition metals are a group of elements found in the middle of the periodic table. They occupy the boxes in Rows 4 through 7 between Groups 2 and 13.  These metals have very similar physical and chemical properties. One of tungsten's unusual properties is its very high melting point of 3,410°C (6,170°F). This is the highest melting point of any metal. Another of its important properties is its ability to retain its strength at very high temperatures. These properties account for tungsten's primary application, the manufacture of alloys. An alloy is made by melting and mixing two or more metals. The mixture has properties different from those of the individual metals.   (Continue reading from Chemistry Explained)

More than 350 years ago, porcelain makers in China incorporated a unique peach colour into their designs by means of a tungsten pigment that was not known in the West. Indeed it was not for another century that chemists in Europe became aware of it. In 1779, Peter Woulfe examined a mineral from Sweden and concluded it contained a new metal, but he did not separate it. Then in 1781, Wilhelm Scheele investigated it and succeeded in isolating an acidic white oxide and which he rightly deduced was the oxide of a new metal.

The credit for discovering tungsten goes to the brothers, Juan and Fausto Elhuyar, who were interested in mineralogy and were based at the Seminary at Vergara, in Spain, 1783 they produced the same acidic metal oxide and even reduced it to tungsten metal by heating with carbon.  (Continue reading from Royal Society of Chemistry)

Most tungsten resources are found in China, South Korea, Bolivia, Great Britain, Russia and Portugal, as well as in California and Colorado. Though it is found in these many places, 80 percent of world’s supply is controlled by China, according to the BBC.

One of the most common, and hardest, tungsten compounds is tungsten carbide. Because of its strength when made into compounds, tungsten is used to harden saw blades and make drill bits. It can take around 10 minutes to cut just one drill bit from tungsten using a diamond cutting system, according to the BBC.  (Continue reading from Live Science)

W is for Tungsten and Wolfram (Nature Chemistry) 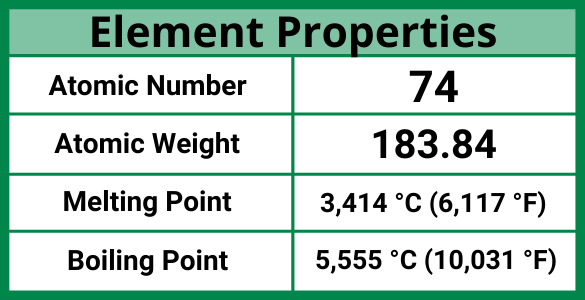