Technetium is the only element below uranium that does not exist on Earth. It is a synthetic (man-made) element produced in a particle accelerator. For many years, chemists knew that an element with atomic number 43 must exist, based on an empty spot in the periodic table. The periodic table is a chart that shows how chemical elements are related to each other. By 1925, only five empty boxes remained. Five elements were still to be discovered.

A number of scientists tried to find those elements. In many cases, the results they announced were wrong. Such was the case with element 43. When the element's "discovery" was announced in 1925, chemists were excited, but no one else was able to repeat the discovery. An error had been made. In fact, it was not until more than ten years later that the element was finally produced. Then, it was created in a particle accelerator and not found on Earth.  (Continue reading from Chemistry Explained)

Technetium long tantalised chemists because it could not be found. We now know that all its isotopes are radioactive and any mineral deposits of the element had long disappeared from the Earth’s crust. (The longest lived isotope has a half life of 4 million years.) Even so, some technetium atoms are produced as uranium undergoes nuclear fission and there is about 1 milligram of technetium in a tonne of uranium. Claims in the 1920s to have found this element, or at least to have observed its spectrum, cannot be entirely discounted.

Technetium was discovered by Emilio Segrè in 1937 in Italy. He investigated molybdenum from California which had been exposed to high energy radiation and he found technetium to be present and separated it. Today, this element is extracted from spent nuclear fuel rods in tonne quantities.(Continue reading from Royal Society of Chemistry)

Technetium is a silvery-gray transition metal. It tarnishes slowly in moist air. It dissolves in nitric acid, aqua regia (nitro-hydrochloric acid) and concentrated sulfuric acid, but is not soluble in any strength of hydrochloric acid.  Technetium’s common oxidation states are +7, +5, and +4. Under oxidizing conditions technetium (VII) will exist as the pertechnetate ion, TcO4-.  Technetium can be chemically bound to many biologically active molecules.  Every form of technetium is radioactive.  (Continue reading from Live Science) 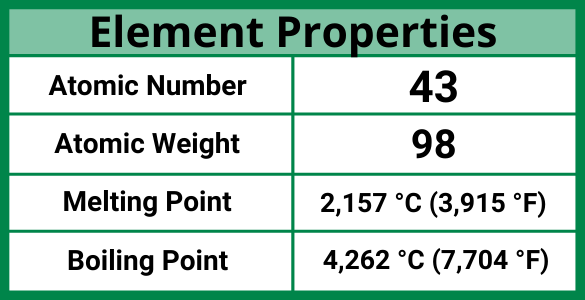