Roentgenium (Rg), artificially produced transuranium element of atomic number 111. In 1994 scientists at the Institute for Heavy Ion Research (Gesellschaft für Schwerionenforschung [GSI]) in Darmstadt, Ger., formed atoms of element 111 when atoms of bismuth-209 were bombarded with atoms of nickel-62. The atoms of element 111 had an atomic weight of 272 and decayed after 1.5 milliseconds into atoms of meitnerium-268 by emitting an alpha particle (helium nucleus). Element 111 was named roentgenium after the German physicist Wilhelm Röntgen, the discoverer of X-rays. (Continue reading from Encyclopedia Britannica)

There are seven known isotopes of the element: 272, 274 and 278-282. The longest lived is isotope 281 which has a half-life of 22.8 seconds. In 1986, physicists at the Russian Joint Institute for Nuclear Research (JINR), bombarded bismuth with nickel hoping to make element 111, but they failed to detect any atoms of element 111. In 1994, a team led by Peter Armbruster and Gottfred Munzenberg at the German Geselleschaft für Schwerionenforschung (GSI), were successful when they bombarded bismuth with nickel and they obtained few atoms of isotope 272. It had a half-life of 1.5 milliseconds. (Continue reading from Royal Society of Chemistry)

Roentgenium is a radioactive, synthetic element about which little is known. It is classified as a metal and is expected to be solid at room temperature.

Roentgenium is produced artificially. The team that discovered it bombarded atoms of bismuth with ions of nickel in a linear accelerator to produce element 111. (Continue reading from Live Science) 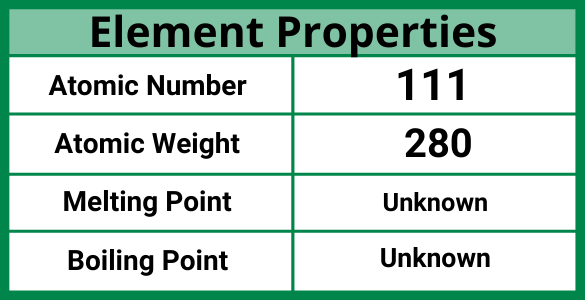