Niobium is a transition metal in Group 5 (VB) of the periodic table. The periodic table is a chart that shows how chemical elements relate to one another.  Niobium is used in many alloys. An alloy is made by melting and mixing two or more metals. The mixture has properties different from those of the individual metals. Niobium alloys are used in items that come into contact with the human body, such as rings for pierced ears, nose, and other body parts. Niobium is used in this kind of jewelry because it does not cause allergies or other problems

Niobium occurs primarily in two minerals, columbite and pyrochlore. The original name columbium was taken from the first of these minerals. Niobium always occurs with tantalum in these minerals. Separating the two elements is always the most difficult step in their preparation.  (Continue reading from Chemistry Explained)

When examining minerals in the British Museum in 1801, Charles Hatchett was intrigued by a specimen labelled columbite. He suspected it contained a new metal, and he was right. He heated a sample with potassium carbonate, dissolved the product in water, added acid and got a precipitate. However, further treatment did not produce the element itself, although he named it columbium, and so it was known for many years.

Others doubted columbium, especially after the discovery of tantalum which happened the following year. These metals occur together in nature, and are difficult to separate. In 1844 the German chemist Heinrich Rose proved that columbite contained both elements and he renamed columbium niobium.  A sample of the pure metal was produced in 1864 by Christian Blomstrand who reduced niobium chloride by heating it with hydrogen gas  (Continue reading from Royal Society of Chemistry)

Niobium is a shiny, white metal that typically forms a film on its surface when exposed to air, turning shades of blue, green, or yellow, according to Chemicool. It has a wide range of uses from use in hypoallergenic jewelry to jet engines to superconducting magnets.

The International Union of Pure and Applied Chemistry officially adopted the name niobium in 1950, according to Los Alamos National Laboratory. However, the element's other name, columbium, is still widely used today.

According to the USGS, nearly all niobium is mined in Brazil and Canada. The estimated amount of niobium in the Earth's crust is thought to last for the next five centuries.   (Continue reading from Live Science) 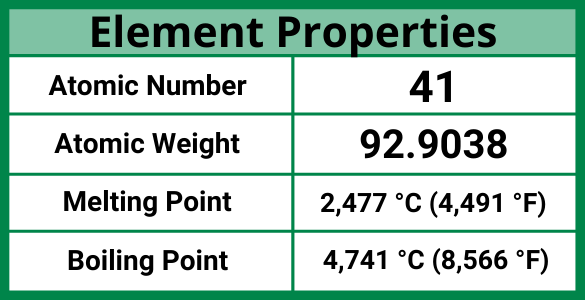