Molybdenum is a transition metal, placing it in the center of the periodic table. The periodic table is a chart that shows how chemical elements are related to one another.

Molybdenum is a hard, silvery metal with a very high melting point. It is used primarily to make alloys with other metals. An alloy is a mixture of two or more metals. The mixture has properties different from those of the individual metals. The most common alloys of molybdenum are those with steel. Molybdenum improves the strength, toughness, resistance to wear and corrosion, and ability to harden steel.  (Continue reading from Chemistry Explained)

The soft black mineral molybdenite (molybdenum sulfide, MoS2), looks very like graphite and was assumed to be a lead ore until 1778 when Carl Scheele analysed it and showed it was neither lead nor graphite, although he didn’t identify it.

Others speculated that it contained a new element but it proved difficult to reduce it to a metal. It could be converted to an oxide which, when added to water, formed an acid we now know as molybdic acid, H2MoO4, but the metal itself remained elusive.

Scheele passed the problem over to Peter Jacob Hjelm. He ground molybdic acid and carbon together in linseed oil to form a paste, heated this to red heat in and produced molybdenum metal. The new element was announced in the autumn of 1781.   (Continue reading from Royal Society of Chemistry)

Molybdenum is a silvery-white metal that is ductile and highly resistant to corrosion. It has one of the highest melting points of all pure elements — only the elements tantalum and tungsten have higher melting points. Molybdenum is also a micronutrient essential for life.It is recovered as a by-product of copper or tungsten mining. Molybdenum is mined primarily in the United States, China, Chile and Peru. World production is around 200,000 tons per year, according to the Royal Society of Chemistry (RSC).  (Continue reading from Live Science)

Made by Molybdenum (Nature Chemistry) 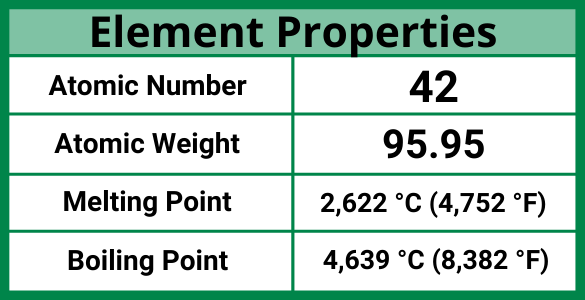