Manganese (Mn), chemical element, one of the silvery white, hard, brittle metals of Group 7 (VIIb) of the periodic table. It was recognized as an element in 1774 by the Swedish chemist Carl Wilhelm Scheele while working with the mineral pyrolusite and was isolated the same year by his associate, Johan Gottlieb Gahn. Although it is rarely used in pure form, manganese is essential to steelmaking. (Continue reading from Encyclopedia Britannica)

Manganese in the form of the black ore pyrolucite (manganese dioxide, MnO2) was used by the pre-historic cave painters of the Lascaux region of France around 30,000 years ago. In more recent times was used by glass makers to remove the pale greenish tint of natural glass.

In 1740, the Berlin glass technologist Johann Heinrich Pott investigated it chemically and showed that it contained no iron as has been assumed. From it he was able to make potassium permanganate (KMnO4), one of the strongest oxidising agents known. Several chemists in the 1700s tried unsuccessfully to isolate the metal component in pyrolusite. The first person to do this was the Swedish chemist and mineralogist Johan Gottlieb Gahn in 1774. However, a student at Vienna, Ignatius Kaim, had already described how he had produced manganese metal, in his dissertation written in 1771. (Continue reading from Royal Society of Chemistry)

Manganese is essential to metabolic functions, according to Chemicool. Human bodies contain approximately 10 to 20 milligrams, and because it can't be stored, humans need to constantly replenish the supply through diet. Some of the foods that contain the highest concentrations of manganese include spinach, tea, some herbs, grains, rice, soybeans, eggs, nuts, olive oil, green beans and oysters, according to Lenntech. Manganese is primarily found in the bones, liver, kidneys, and pancreas, according to the University of Maryland Medical Center, and helps the body form connective tissue, bones, blood-clotting factors, and sex hormones. (Continue reading from Live Science)

10 Evidence Based Benefits of Manganese (Healthline) 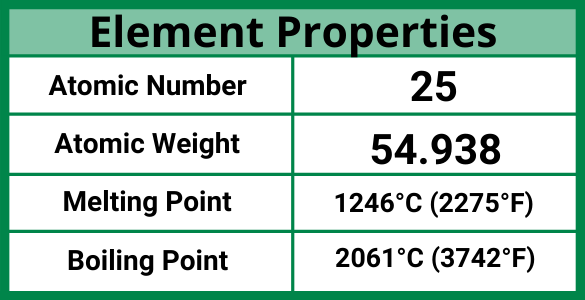