Hafnium is a bright, silvery-gray metal that is very ductile. Ductile means capable of being drawn into thin wires. The physical property of greatest interest for hafnium is how it responds to neutrons. A neutron is a very small particle found in the nucleus (center) of an atom. Neutrons are used to make nuclear fission reactions occur. Nuclear fission reactions take place when a neutron strikes a large atom, such as an atom of uranium. The neutron makes the atom break apart. In the process, a large amount of energy is released. That energy can be converted to electricity.  Like zirconium, hafnium is not very reactive. It does not combine easily with oxygen in the air or react with water or cold acids. It may be more active with hot acids, however.  Hafnium and zirconium are as alike as any two elements in the periodic table.  (Continue reading from Chemistry Explained)

In 1911, Georges Urbain reported the discovery of the missing element below zirconium in the periodic table, but he was wrong and the search continued. It was finally discovered by George Charles de Hevesy and Dirk Coster at the University of Copenhagen in 1923. It was found in a zirconium mineral, a Norwegian zircon, but it had proved very difficult to separate it from zirconium and this explained why hafnium remained undiscovered for so long.  The first pure sample of hafnium itself was made in 1925 by decomposing hafnium tetra-iodide over a hot tungsten wire. (Continue reading from Royal Society of Chemistry)

Hafnium is a lustrous, silvery-gray transition metal.  It was the next-to-last element with stable nuclei to be added to the periodic table (the final one was rhenium in 1925).  The element has some very important commercial applications, including its use in the nuclear power industry, electronic equipment, ceramics, light bulbs and in the making of super-alloys.  Hafnium is rarely found free in nature, and instead is present in most zirconium minerals at a concentration of up to 5 percent.   In fact, hafnium is so chemically similar to zirconium that separating the two elements is extremely difficult. Most commercial hafnium is produced as a byproduct of zirconium refining.  Hafnium is the 45th most abundant element on Earth, comprising about 3.3 parts per million (ppm) of the Earth's crust by weight, according to Chemicool.    (Continue reading from Live Science) 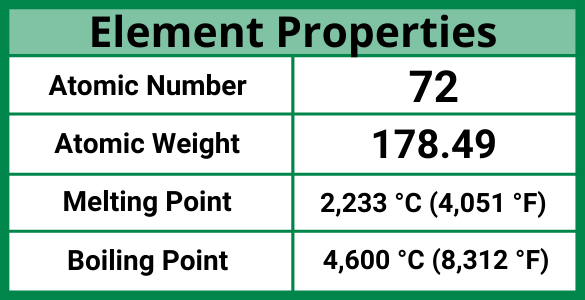