Darmstadtium (Ds), artificially produced transuranium element of atomic number 110. In 1995 scientists at the Institute for Heavy Ion Research (Gesellschaft für Schwerionenforschung [GSI]) in Darmstadt, Germany, announced the formation of atoms of element 110 when lead-208 was fused with nickel-62. The atoms of element 110 had an atomic weight of 269 and decayed after 260 microseconds (1 microsecond = 1 millionth of a second) into atoms of hassium-265 by emitting an alpha particle (helium nucleus). Element 110 was named darmstadtium after the German city where the GSI is located. (Continue reading from Encyclopedia Britannica)

There are 15 known isotopes of darmstadtium, isotopes 267-281, and the heaviest is the longest-lived, with a half-life of 4 minutes.

There were several attempts to make element 110 at the Joint Institute for Nuclear Research (JINR) at Dubna in Russia, and at the German Geselleschaft für Schwerionenforschung (GSI) at Darmstadt, but all were unsuccessful. Then Albert Ghiorso and his team at the Lawrence Berkeley National Laboratory (LBNL), California, obtained isotope 267 by bombarding bismuth with cobalt, but they could not confirm their findings.

In 1994, a team headed by Yuri Oganessian and Vladimir Utyonkov at the JINR made isotope-273 by bombarding plutonium with sulfur. The same year, a team headed by Peter Armbruster and Gottfried Munzenberg at the GSI bombarded lead with nickel and synthesised isotope 269. The latter group’s evidence was deemed more reliable and confirmed by others around the world, so they were allowed to name element 110. (Continue reading from Royal Society of Chemistry)

Darmstadtium is named for the city of Darmstadt, Germany, where it was discovered. The name was confirmed by the International Union of Pure and Applied Chemistry in 2003.

Darmstadtium is a radioactive, synthetic element about which little is known. It is classified as a metal and is expected to be a solid at room temperature. The first produced atoms had a lifetime of only 1/100th of a second, but scientists later produced heavier, more stable versions. (Continue reading from Live Science) 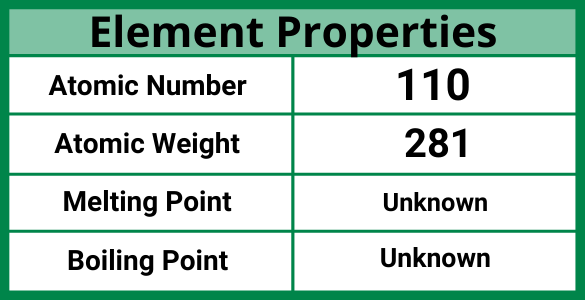