Chromium (Cr), chemical element of Group 6 (VIb) of the periodic table, a hard steel-gray metal that takes a high polish and is used in alloys to increase strength and corrosion resistance. Chromium was discovered (1797) by the French chemist Nicolas-Louis Vauquelin and isolated as the metal a year later; it was named for its multicoloured compounds. The green colour of emerald, serpentine, and chrome mica and the red colour of ruby are due to small amounts of chromium. (Continue reading from Encyclopedia Britannica)

Chromium was discovered by the French chemist Nicholas Louis Vauquelin at Paris in1798. He was intrigued by a bright red mineral that had been discovered in a Siberian gold mine in 1766 and was referred to as Siberian red lead. It is now known as crocoite and is a form of lead chromate. Vauquelin analysed it and confirmed that it was a lead mineral. Then he dissolved it in acid, precipitated the lead, filtered this off, and focused his attention on the remaining liquor from which he succeeded in isolating chromium. Intrigued by the range of colours that it could produce in solution, he named it chromium from the Greek word chroma meaning colour. He then discovered that the green colouration of emeralds was also due to chromium (Continue reading from Royal Society of Chemistry)

Using a technique called electroplating, a thin layer of chromium can coat metal and plastic objects, including car parts and household appliances, to give a shiny, attractive finish. For example, automotive designers use chrome rims and wheels to spruce up their cars. Chrome plating is not only used for looks; because the chromium forms a protective oxide layer on the surface, chrome-plated objects resist corrosion, according to Krebs. 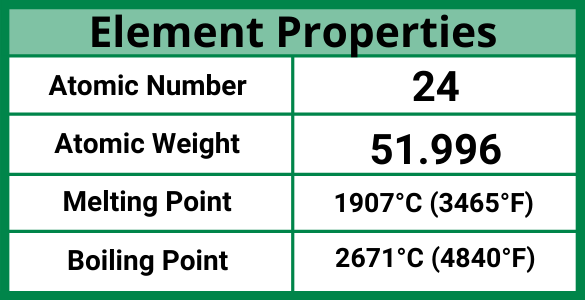